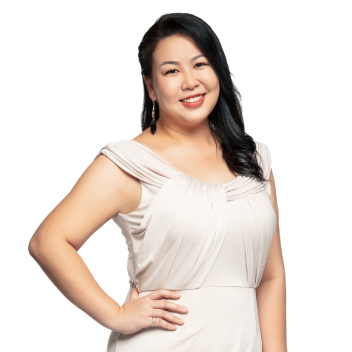 Charmaine kick started her radio journey in 2008, and throughout her professional career, has interviewed many notable celebrities, chefs and artists, including the likes of Hugh Jackman, Taron Egerton, Dexter Fletcher, George Calombaris, Cyril Takayama, David Archuleta and Vertical Horizon among others.

An accomplished emcee and voiceover talent, Charmaine brings her own brand of polish and professionalism to each and every on-site show she's hosted, and commercial she's ever voiced. She has provided hosting services for various clients, including DBS Treasures, Nike, adidas, Sony Pictures Entertainment, Ben & Jerry's, Heineken, Hush Puppies and Sentosa. She has also lent her voice to brands like Volkswagon, Seiko, Fujitsu, MAC Cosmetics, Nature's Farm and Tiger Airways among others.

Aside from her passion of eating good food, Charmaine also enjoys pottering around in the kitchen and testing out new recipes she finds online. In addition, she enjoys travelling and hunting down the best food and views each city has to offer. Many of her kitchen experiments also include food she's been inspired by on her many frequent travels!